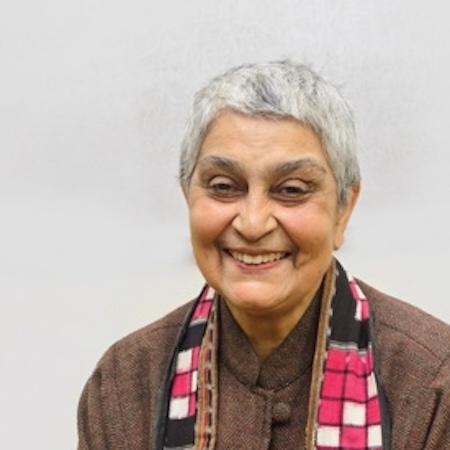 Gayatri Chakravorty Spivak is University Professor, the highest honor given to a handful of professors across the university, and a founding member of the Institute for Comparative Literature and Society at Columbia University. She is a critical theorist whose work has been particularly influential to the field of post-colonialism, for which she is often referred to as having been a pioneer.

She received her B.A. at the University of Calcutta (1959); her M.A. (1962) and Ph.D (1967) from Cornell University. Professor Spivak has also taught at Brown, Texas at Austin, UC Santa Cruz, Université Paul Valery, Jawaharlal Nehru University, Stanford, University of British Columbia, Goethe Universitat in Frankfurt, Riydah University, and Emory. Before coming to Columbia in 1991, she was the Andrew W. Mellon Professor of English at the University of Pittsburgh. She has been a Fellow of the National Humanities Institute, the Center for the Humanities at Wesleyan, the Humanities Research Center at the Australian National University, the Center for the Study of Social Sciences (Calcutta), the Davis Center for Historical Studies (Princeton), the Rockefeller Foundation (Bellagio). She has been a Kent fellow and a Guggenheim Fellow. Among her Distinguished Faculty Fellowships is the Tagore Fellowship at the Maharaja Sayajirao University of Baroda (India). She has been a member of the Subaltern Studies Collective.

An activist as well as an educator, she is involved in international women's movements and issues surrounding ecological agriculture. She has been deeply involved in rural education in Asia for nearly two decades.

Among her publications are Of Grammatology (translation with critical introduction of Jacques Derrida's De la grammmatologie), Imaginary Maps and Breast Stories (translations with critical material of the fiction Mahasweta Devi), In other Worlds, The Post-Colonial Critic, and Outside in the Teaching Machine. Her most recent book is An Aesthetic Education in the Era of Globalization (2012).

She is on the editorial Board of many journals, among them Cultural Critique, boundary 2. New Formations, Diaspora, ARIEL, Re-thinking Marxism, Public Culture, Parallax, Interventions.