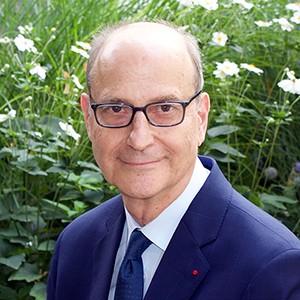 Paul LeClerc began his tenure as director of the Columbia Global Centers | Paris on July 1, 2012. LeClerc’s academic interests are Voltaire and the French Enlightenment. He received his M.A. and Ph.D. in French at Columbia and wrote a dissertation on Voltaire that was awarded distinction.  He is the author, editor, and co-editor of six scholarly volumes, all published by the Voltaire Foundation of Oxford University. His foreign honors include the French Legion of Honor (Officier), the French Order of Palmes Academiques (Officier), and the Spanish Order of Isabel the Catholic (Commander), as well as honorary doctorates from Oxford University and La Nouvelle Sorbonne. In 2004 LeClerc received the Columbia Graduate School of Arts and Sciences Dean’s Award  for Distinguished Achievement and he holds honorary doctorates from nine American colleges and universities. In addition, President Bill Clinton named him to the President’s Committee on the Arts and Humanities. He was named the Networking Chair of Columbia Global Centers in June of 2014.

Throughout his career, LeClerc has been committed to international educational and cultural relations. He directed terms abroad for Union College students in France, was instrumental in creating the CUNY-Universities of Paris Exchange Program, the first large-scale exchange program between an urban US university system and a European counterpart, created exchanges between the Hunter College Master of Fine Arts program and the Ecole des Beaux-Arts in Paris and between the Baruch College School of Business and the University of Paris-Dauphine, and organized landmark exhibits at the New York Public Library with European partner libraries.

LeClerc is presently Chair of the Advisory Board of the Columbia Maison Francaise and a Trustee of the Andrew W. Mellon Foundation, the J.Paul Getty Trust, The Voltaire Foundation (Oxford University) and the Carroll and Milton Petrie Foundation. He is an Honorary Trustee of the New York Public Library and past Trustee of Union College, the National Book Foundation, and a variety of other non-profit educational and cultural organizations.