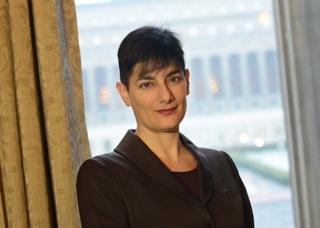 Sharon Marcus is currently Orlando Harriman Professor of English and Comparative Literature and Dean of Humanities at Columbia University, where her research and teaching focus on nineteenth-century English and French literature and history.  She will spend her fellowship year completing a book that traces the rise of modern celebrity culture and explains its allure.

Born in New York, Marcus earned her B.A. from Brown University and her Ph.D. from the Johns Hopkins University, both in comparative literature. After teaching for many years at the University of California, Berkeley, she moved to Columbia University in 2003.

Marcus’s scholarship explores how cultures assign value. Her first book, Apartment Stories: City and Home in Nineteenth-Century Paris and London (University of California Press, 1999), compared how two world cities handled, in fiction and in fact, new arrangements of domestic and urban space. Her second book, Between Women: Marriage, Desire, and Friendship in Victorian England (Princeton University Press, 2007), used an array of sources that included novels, diaries, children’s literature, fashion magazines, and early anthropological writing to challenge the truism that Victorian England placed little value on relationships between women.  Between Women was translated into Spanish and won the Albion prize for best book on Britain after 1800, the Perkins prize for the best book contributing to the study of narrative, and Alan Bray and Lambda Literary awards for the best book in lesbian and gay studies.

An interest in literary theory and critical methods led Marcus to collaborate with Professors Stephen Best and Heather Love on two widely cited essays that ask provocative questions about how we interpret texts: “Surface Reading” (2009) and “Building a Better Description” (2016), both published in the journal Representations.

In 2012, with Caitlin Zaloom, Marcus co-founded Public Books, an online magazine that combines the best of old and new media, appealing to digital natives and late adopters alike by featuring great writing by scholars, artists, and activists on current books, arts, and ideas. Marcus has also written on literature, film, and gender for the New York Times Book Review, the Wall Street Journal, the Boston Globe, Pacific Standard Magazine, and the Chronicle Review.