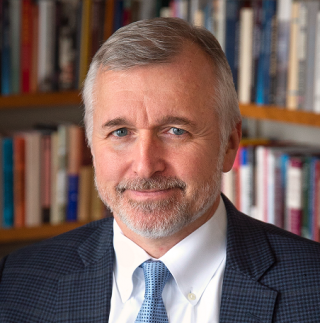 Thomas J. Christensen
James T. Shotwell Professor of International Relations and Director of the China and the World Program

From 2006-2008 he served as Deputy Assistant Secretary of State for East Asian and Pacific Affairs with responsibility for relations with China, Taiwan, and Mongolia. His research and teaching focus on China’s foreign relations, the international relations of East Asia, and international security. His most recent book, The China Challenge: Shaping the Choices of a Rising Power (W.W. Norton) was an editors’ choice at the New York Times Book Review, a “Book of the Week” on CNN”s Fareed Zakaria GPS, and the Arthur Ross Book Award Silver Medalist at the Council on Foreign Relations. Professor Christensen has also taught at Cornell University and MIT. He received his B.A. with honors in History from Haverford College, M.A. in International Relations from the University of Pennsylvania, and Ph.D. in Political Science from Columbia University. He has served on the Board of Directors and the Executive Committee of the National Committee on U.S.-China Relations, as co-editor of the International History and Politics series at Princeton University Press, and as a member of the Academic Advisory Committee for the Schwarzman Scholars Program. He is currently the Chair of the Editorial Board of the Nancy B. Tucker and Warren I. Cohen Book Series on the United States in Asia at Columbia University Press. Professor Christensen is a life member of the Council on Foreign Relations and a Non-Resident Senior Scholar at the Brookings Institution. He was presented with a Distinguished Public Service Award by the United States Department of State.