On April 24, all nine Columbia Global Centers brought together scholars and specialists from a broad spectrum of fields to debate themes that have broad local and global impacts. The discussion was held throughout the day via videoconference and integrated the Global Centers from different parts of the world with the main Global Center office in New York, where Safwan Masri (Vice President for Columbia Global Centers and Director of the Amman center), Carol Gluck (Chair at the Committee on Global Thought) and Vishakha Desai (Senior Advisor for Global Affairs to the President of Columbia University and a Senior Research Scholar for the School of International and Public Affairs) were based.

The initiative is part of the new Committee on Global Thought (CGT) project, Thoughts on a Changing World, which aims not simply to assess the current global situation but to set an agenda for thinking and acting in our changing world, an agenda that is as much about the future as it is about the present. The idea is to confer with colleagues around the world from universities, government, business, journalism, and civil societies and share local experiences and thoughts that can be applied in discussing the global situation as a whole.

For the Brazilian participation in the discussion, the focus was on the polarization (mainly in politics) faced not only by us in Brazil, but by the whole world nowadays. Moderated by the Columbia Global Centers | Rio de Janeiro Director Thomas Trebat, the roundtable brought Hebe Mattos (Professor of Brazilian History and Coordinator of the Laboratory of Oral History and Image at the Universidade Federal Fluminense -UFF-), Luiz Felipe de Alencastro (Professor of Economic History and Director of the Center for South Atlantic Studies at the São Paulo School of Economics - FGV and Emeritus Professor at the University of Paris - Sorbonne), Daniela Pinheiro (Brazilian journalist at Piauí magazine) and Bolívar Lamounier (Brazilian political scientist, sociologist and member of the Academia de Letras de São Paulo - São Paulo Academy of Letters). 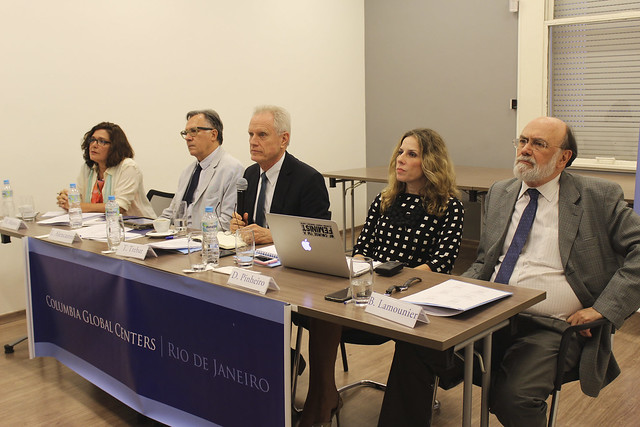