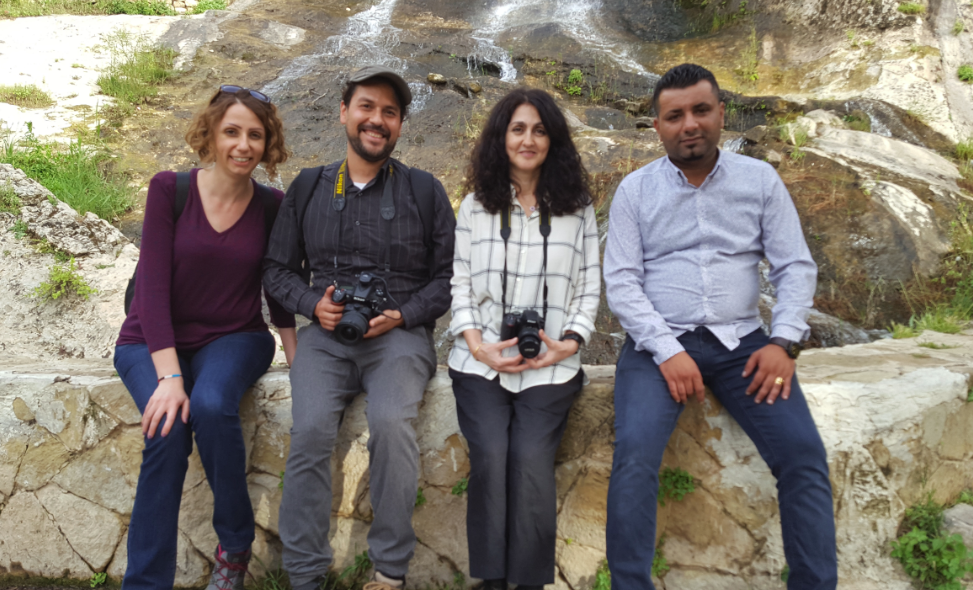 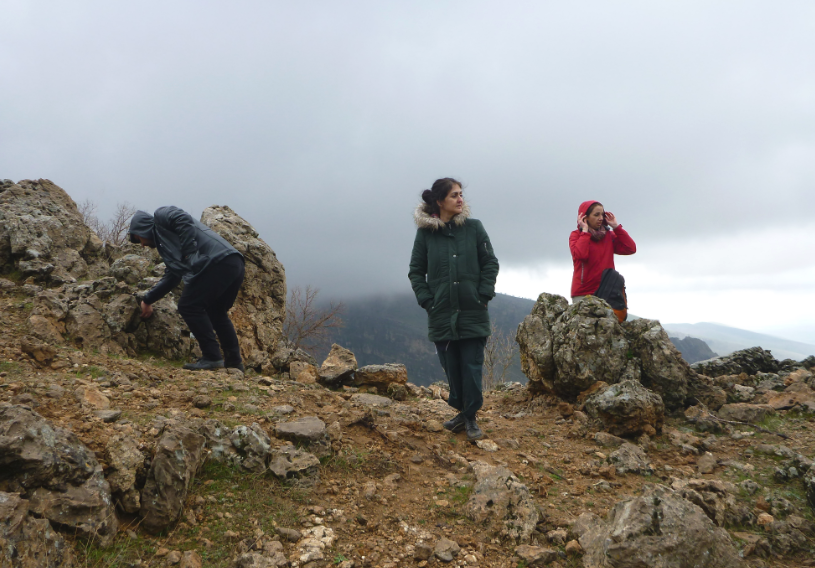 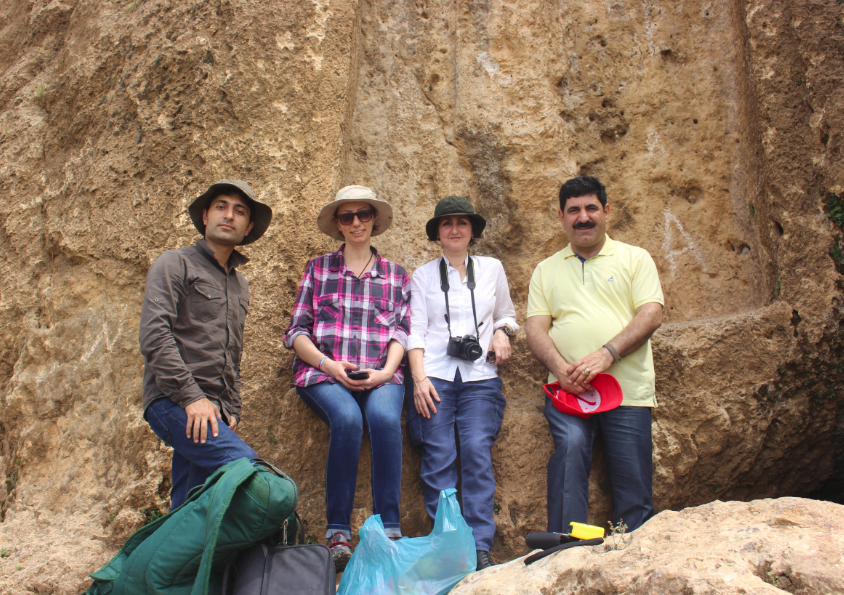 1)We hosted you for your Mapping Mesopotamian Monuments PGIF project. Can you describe your experience(s) working on it with our Center?

I have worked with the Istanbul Center in relation to two projects, “Mapping Mesopotamian Monuments” and “The Future of the Past”, both of which were supported by a grant from Columbia’s PGIF.

Mapping Mesopotamian Monuments is an ongoing the fieldwork project that started in 2013 and for which I won the PGIF grant. Our team documents historical architecture on site in zones of violence and conflict. It is an architectural and archaeological survey in Iraq and Southeast Turkey, studying sites and monuments that span in time from antiquity to the Ottoman era and early twentieth century. We focus not only on cities or urban centers but also on historical landscapes. Mapping a historical cartography that is multiple and diverse, and charting a rich palimpsest distributed across this ancient landscape, allows one to see the history of Mesopotamia in the built environment and as a tangible living past in the present. Our project utilizes the most recent imaging technologies to document monuments on site, in their contextual location within the landscape. We are among the first to utilize processed immersive 360 degree image capture in order to contextualize works of architecture and monuments in urban space on the one hand, and in landscapes on the other. We also produce photogrammetry models and high-resolution perspectival still imaging and details.  We use these new technologies are tools that we use to record the rich history of the region in urban spaces and architectural monuments, and in landscapes where monuments such as ancient rock reliefs carved into the mountains signify the great antiquity of the land. It is important to do this work because this is an area that has been ravaged by war and conflict. The Istanbul Center has been a home base for our team when we travel to Iraq and Southeast Turkey and has facilitated and supported our work in many practical ways. When in the summer of 2015, I presented my fieldwork in a talk at the Istanbul Center. As a result, I was approached by the Chrest Foundation which wanted to offer support for the fieldwork, as well as for the Future of the Past project that I initiated at the same time. I received a generous grant from the Chrest Foundation which supported workshops I held with colleagues in the region, a season of fieldwork in documenting and assessing heritage sites, and the creation of an interactive website of monuments. The website is now live: https://mcid.mcah.columbia.edu/art-atlas/mapping-mesopotamian-monuments

The Future of the Past initiative involved bringing together archaeologists and museum professionals from Iraq and Syria with colleagues from New York and Istanbul to discuss how best to protect the cultural heritage of these lands in the face of armed conflict. The first intensive, closed door workshop in 2015 was in Istanbul, and could not have taken place without the Istanbul Center’s organization and all-encompassing support. The methodology and format of the meeting, including the use of simultaneous interpreters in three languages, English, Turkish and Arabic, were all thought through and organized by the staff of the Istanbul Center, as were all the travel arrangement and hosting of the regional colleagues. Most importantly, that first meeting in Istanbul was pivotal for the next two subsequent meetings that were held in CUMERC Amman and the adjoining training sessions that took place at the American School of Oriental Research in Amman. The three workshops of The Future of the Past project (2015, 216, 2018) which have been enormously successful, commenced and kicked off in Istanbul. Without the long term planning of the format and direction that was generated by the first meeting, the following meetings would not have materialized. This was in no small part a result of the setting, the planning and organization by the staff at Istanbul who immediately understood the necessity of this event and took up most of the responsibility for arranging it. We began to organize this first meeting soon after DAESH had taken over the city of Mosul. We did not seek publicity at the time, for the sake of protecting colleagues who work on site in Iraq and Syria. I had asked Dr Joan Aruz, then Curator at the Metropolitan Museum of Art in New York, to partner with us in the Istanbul workshop. Dr Aruz enthusiastically joined the project, and brought colleagues and staff from the Met into the project in order to offer their museological expertise. I am indebted to Dr Aruz for bringing in the Met colleagues to partner with us in the Future of the Past project, and for bringing additional financial support from the Whiting Foundation for the following two meetings that were to take place at CUMERC Amman in 2016 and 2018. I am also deeply grateful to Ipek Cem Taha, the Director of the Columbia Global Centers | Istanbul, and to her remarkable staff. Without their professionalism, support and warm hospitality these projects would not have been possible.

2)In addition to leading the PGIF project, you are also a valued Faculty Steering Committee of our Center. Through these experiences, how do you see the role of Columbia Global Centers | Istanbul in facilitating global programs in Turkey and in the region?

As a member of the Faculty Steering Committee of the Istanbul Center, I feel strongly that the Center is not only for Columbia faculty and students who wish to visit and study in Istanbul. It is a place of scholarly interaction and collaboration with colleagues and students in Turkey. I feel that this is the purpose of all the Columbia Centers in their various locations. The Global in the name ought to mean that we have a conversation; we should not only bring in ideas from the New York campus but to work together with, and learn from, colleagues and students in Istanbul and in the region. I think that the Future of the Past project was a success exactly because of this; it was a workshop where real conversations took place and solid plans made, and then enacted, for the protection of cultural heritage in the region.

3)How do you see Columbia programs in Istanbul contributing to the overall learning experience of Columbia and local students?

For Columbia University students, travel seminars led by faculty members have been a wonderful way for them to learn on site, especially in my own field of art and architectural history and archaeology. The lecture series that are open to students in Istanbul have likewise been a tremendous success. They are often standing room only at Studio-X and as a Faculty Steering Committee member I am pleased with that success and even more so for that model for a Global Center that is more interactive, in a different way from other US universities and overseas programs.