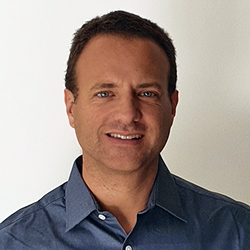 Before coming on board with the Santiago Center, Christian Molinari worked as a freelance journalist, writing stories for international publications, editing books, generating optimized online content for companies and translating corporate documents. Previous to that he was the External Communications and Branding Leader for IBM Chile, where he headed up the company’s campaign to position the concept of cognitive computing in press, forums and the general population.

Prior to his time at IBM Chile, Chris worked at the online publication Business News Americas for 11 years, where he developed professionally in several pressroom positions, telling the story of Latin America’s development in a number of economic sectors. Specifically, he covered and led the areas of water & infrastructure and telecommunications & information technology, and he came to manage the pressroom of international reporters.

Chris is a native of San Francisco, California, and he originally arrived to Chile to work as a volunteer with disadvantaged children. He fell in love with Chile’s people and culture and has remained in the country ever since.