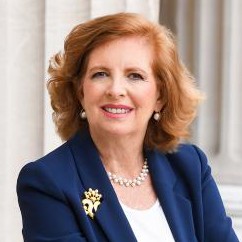 Merit E. Janow is an internationally recognized expert in international trade and investment. She has extensive experience in academia, government and business, and has been involved with the Asia-Pacific region for her entire life.

Janow served as Dean of the faculty of Columbia University’s School of International and Public Affairs (SIPA) from July 2013 through December 2021.  As Dean, she strengthened the school by launching new programs and initiatives, for example in technology and public policy – with a focus on cyber security and the digital economy – entrepreneurship and policy, and central banking and financial policy, among other areas. She also has grown SIPA’s faculty in numerous areas; supported the creation of new research centers; and completed two capital campaigns.

For the past 27 years, Janow has been a professor at both SIPA and Columbia Law School. She teaches graduate courses in the digital economy, international trade and investment law and policy, comparative antitrust law and policy, and China in the global economy.  She has held a number of leadership positions at the University.  She is co-director of the APEC Study Center at Columbia Business School and previously served as Chair of the Committee for Socially Responsible Investing which oversees the proxy voting of shares owned by the Columbia University endowment.  Janow has written three books and numerous articles and frequently speaks before business, policy, and academic audiences around the world.

Professor Janow has had three periods of government service. In December 2003, while at Columbia University, she was elected by the WTO Membership as one of the seven Members of the World Trade Organization’s (WTO) Appellate Body, which is the court of final appeal for adjudicating trade disputes between the 164 member nations of the WTO. She was the only North American member and the first female to serve on the Appellate Body. In the course of her four years of service, she reviewed more than 30 appeals covering a diverse range of trade disputes, including technology, subsidies, agriculture, investment and trade remedies. From 1997-2000, Janow served as the Executive Director of the first international antitrust advisory committee to the Attorney General and Assistant Attorney General for Antitrust of the US Justice Department. The key recommendations were implemented on an international basis and led to the establishment of the International Competition Network (ICN).  From 1989 to 1993, prior to joining Columbia University, Janow served as Deputy Assistant USTR for Japan and China in the Executive Office of the President. In this capacity she was responsible for developing and implementing U.S. trade policies towards Japan and China; and leading the negotiations for a dozen bilateral trade agreements.

Janow has had extensive corporate and nonprofit board experience and currently serves on several corporate boards along with Japan Society and the National Committee on US China Relations.    She was recently appointed in December 2021 as a member of a World Bank High Level Advisory Group on Sustainable and Inclusive Growth. Janow is a member of the Council on Foreign Relations and the Trilateral Commission. She previously served as a member of the international advisory council of China’s sovereign fund, the China Investment Corporation (CIC).  Early in her career, Janow was a corporate lawyer specializing in cross-border mergers and acquisitions with Skadden, Arps, Slate, Meagher & Flom in New York. She grew up in Tokyo, Japan, and speaks Japanese. She has a JD from Columbia Law School where she was a Stone Scholar and a BA in Asian Studies from the University of Michigan