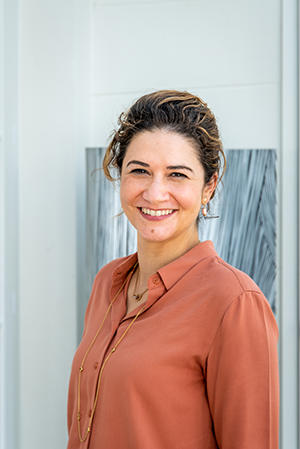 Since 2021, Séverine has led the public programs of Columbia Global Centers | Paris, whose mission is to strengthen partnerships between Columbia University and French cultural and educational institutions. In this capacity, she works closely with faculty and scholars at Columbia and French universities, as well as representatives from UNESCO, Fulbright, OECD, the American Embassy, the Musée d'Orsay, and others.

Séverine also acts as the Director of the Columbia Undergraduate Programs in Paris, She is responsible for leading Columbia's academic programs at Reid Hall, which welcome an average of 200 students per year. .

In addition, Séverine has been on the Board the Columbia Alumni Association – France since 2015, and is currently serving as its "Secrétaire générale," organizing events for the overall Columbia community in France.

A French-Haitian graduate of Barnard College (BC '04), Séverine has been part of the Columbia community for over two decades – first in New York, where she earned her MA (GSAS '06) and PhD (GSAS '13), and then in Paris at Reid Hall. A scholar of modern French literature by training, Séverine continues to teach French literature, and intellectual history, notably around the age of the Enlightenment. Her other areas of interest are women's studies, aesthetics, and avant-garde art.