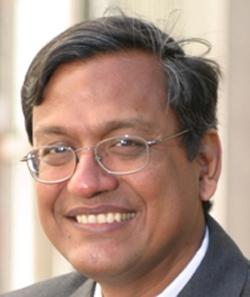 Vijay Modi is a professor of mechanical engineering at Columbia University and an Earth Institute faculty member. He also lead the UN Millennium Project effort on the role of energy and energy services in reaching the Millennium Development Goals (MDG’s). Currently, he is focused on making consumer-scaled versions of technology that is normally supersized available to developing countries. ”There are no small-scale power generators. Ten kilowatts capacity is standard and requires lots of maintenance. There is no interest in the one kilowatt version. It is not appealing to the western market. The key is to figure out how to make innovation happen in a low-cost market.” He adds that the engineer’s dream is not only a new device but one that is maintenance free. “Why not create a small-scale generator that is robust?” His students are also designing robust information technology systems that allow remote access to information from agricultural villages. “These are projects that are not typically driven by large amounts of funding, but they occur in places that are in need of innovation.”

A recent project is developing a sub-metering system for shared solar energy, which involves a small piece of hardware that recognizes a code from a pre-purchased card, almost like a phone card, allowing an individual in a developing country to spend only five dollars a month for energy if that is all they have to spend. Modi and his team are deploying the first version of this in Mali at the end of 2010. Metering is important, he says, because it brings transparency and accountability in the use of a shared resource like water or energy. It allows for infrastructure to be built in one place to serve, at lower cost, a larger, potentially transnational area in a place like Africa. But in order to share, the use must be metered. To this end, Modi is working on “network planner,” a computer model that is a decision support tool to help make assumptions transparent to policymakers. Only with transparency can policy be created that can make a difference in agriculture and its use of water and energy.

“Even engineers are becoming more interdisciplinary. Historically, science was driven by curiosity and engineering by relevance. Now, in academia, with engineers becoming more curiosity-driven and scientists seeking relevance, there is less of a distinction. The interaction between curiosity and relevance is good because it shapes the questions that we are asking and makes them more interesting,” says Modi. “As we work on some practical matter it will uncover the need for new data and new science.”

It is not surprising to learn that Modi is a two-time winner of prestigious teaching awards from Columbia. In 1996, Modi received the Distinguished Faculty Teaching Award from the Columbia Engineering School Alumni Association, the first year the award was given. The following year he received the Great Teacher Award from the Society of Columbia Graduates.

Modi’s own decision to become an engineer was more random than he would like most policy decisions to be. Given the choice in his native India to become either a doctor or an engineer, he made the decision to pursue engineering based on the fact that if he attended medical school, it would have to have been in an institution in his hometown, but if he went to engineering school, the nearest institution was in Mumbai which was for him, a glamorous place to be. The decision was further motivated by the fact that the engineering school option in Mumbai was of a higher caliber than the medical school option in his hometown. Once in engineering school, according to Modi “It was hard not to notice a stark contrast in what you study and what was around. You talk about all this stuff, but all this stuff wasn’t working where we were.” It was that realization that helped influence his decision to apply his knowledge to the developing world.

Vijay Modi received a B. Tech. in mechanical engineering from the Indian Institute of Technology (Mumbai, India) in 1978, and he received his Ph.D. from Cornell University in 1984. He pursued postdoctoral research at MIT from 1984 to 1986. He has been a professor of mechanical engineering at Columbia since 1986, and a member of the Earth Institute faculty since 2006. His expertise is in the fields of energy sources and conversion, heat/mass transfer, and fluid mechanics. Previously, he led the UN Millennium Project effort on the role of energy and energy services in reaching the Millennium Development Goals. Currently, he is focused on three projects: leading the infrastructure team for the Millennium Villages Project (10 countries, 14 sites across sub-Saharan Africa), developing planning and decision-support tools for infrastructure, and looking at the food-energy-water nexus in Indian agriculture. Modi also works on projects in water (with fellow Earth Institute faculty member Upmanu Lall), urban infrastructure (through the IGERT program led by fellow Earth Institute faculty member Patricia Culligan), and optics of concentrated solar and software systems for m-health with lab colleague Matt Berg. He has authored or co-authored numerous journal papers and served as the principal or co-principal of a number of research grants from government and industry.