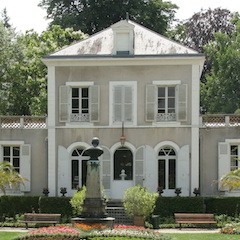 In 2009, the Ville de Provins and Columbia University established a cooperative relationship for the use of the city’s archives and municipal library by Columbia faculty and students and by affiliates of the Columbia Global Centers | Europe at Reid Hall in Paris. Columbia researchers studying the collections can access them outside the regular opening hours and stay in housing provided by the City of Provins. Since the signing of the agreement, scholars from Columbia have visited the fonds ancien in Provins nearly every year.

The collections in Provins include rare manuscript and printed material from the Middle Ages through the twentieth century. The visits of Columbia researchers to Provins are coordinated and hosted by Luc Duchamp, Conservator in chief of Cultural Heritage, who directs the Service des patrimoines of the city of Provins. Duchamp is a historian specializing in religious history, with a particular focus on confraternal movements in France in the sixteenth through eighteenth centuries. Among his scholarly projects are contributions to the complete edition of the Mémoires of the Provins priest Claude Haton (ca 1534- ca 1605), which is an important source for the history of Champagne and Brie, and more generally for the history of the Wars of Religion.

Since 2006, Duchamp has directed the municipal museum, the « fonds patrimonial » of the municipal library, and the municipal archives. He supervises the digitization of the library’s significant collection of medieval and modern manuscripts, which he initiated after having carried out a plan of conservation and restoration of the collection of medieval sealed charters. His involvement in architectural and other cultural heritage has led him to co-organize several conferences, colloquia, and research seminars. In spring 2018, the former Benedictine priory of Saint-Ayoul in Provins was the site of a training camp in the science of conservation-restoration of cultural heritage attached to the European program IPERION CH (Integrated Platform for the European Research Infrastructure on Cultural Heritage).

In 2018-19, Luc Duchamp and Susan Boynton organized several interdisciplinary study days and seminars at the Villa Garnier with a focus on medieval liturgical manuscripts in the fonds ancien, especially those from the churches of Provins.

To arrange for a visit to Provins, Columbia researchers should contact Susan Boynton (Professor, Department of Music), who is currently overseeing the agreement ([email protected]).