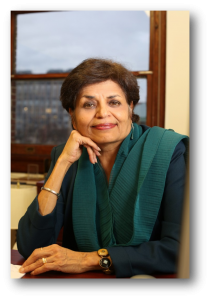 Dr. Vishakha N. Desai is Senior Advisor for Global Affairs to the President of Columbia University and a Senior Research Scholar for the School of International and Public Affairs at Columbia University. She also serves as Senior Advisor for Global Programs to the Solomon R. Guggenheim Foundation. From 2004 through 2012, Dr. Desai served as President and CEO of the Asia Society, a global organization dedicated to strengthening partnerships between Asia and the U.S. Under her leadership the society expanded the scope and scale of its activities with the opening of new offices in India and Korea, a new center of U.S.-China Relations, internationally recognized education programs, and inauguration of two new architecturally distinguished facilities in Hong Kong and Houston.

In 2012, in recognition of Dr. Desai’s leadership in the museum field, President Barack Obama appointed her to serve on the National Museum and Library Services Board. An internationally renowned scholar of Asian art, she has published and lectured extensively on the intersection of traditional and contemporary arts and policy in diverse countries of Asia. Dr. Desai is an Advisory Trustee of the Brookings Institution, and a Trustee of the Bertelsmann Foundation, AFS Intercultural Programs. She serves as a member of the International Advisory Committee for the Auroville Foundation, India, as well as on the Corporate Board of Mahindra & Mahindra, one of India’s largest global corporations.

Dr. Desai holds a B.A. in Political Science from Bombay University and an M.A. and Ph.D. in Asian Art History from the University of Michigan, in addition to honorary degrees from Williams College, MA 2014; Centre College, KY, 2008; Pace University, NY, 2008; The College of Staten Island, NY, 2006; and Susquehanna University, PA, 1996.