Many of the Amman Center’s programs pair Columbia University students and faculty with practitioners throughout the Middle East, working in a variety of sectors, to develop hands-on projects that promote study and expand the range of academic experiences. 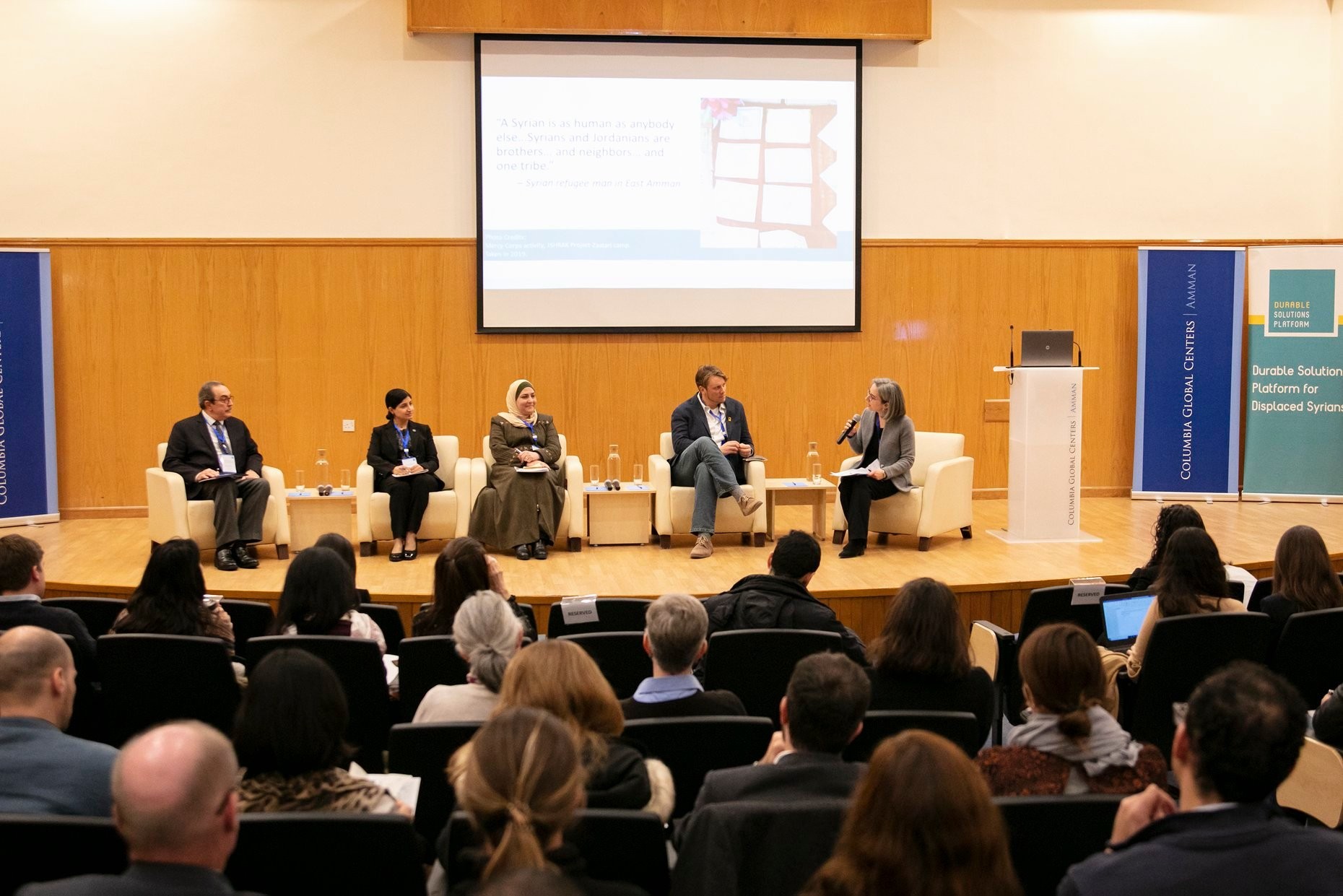 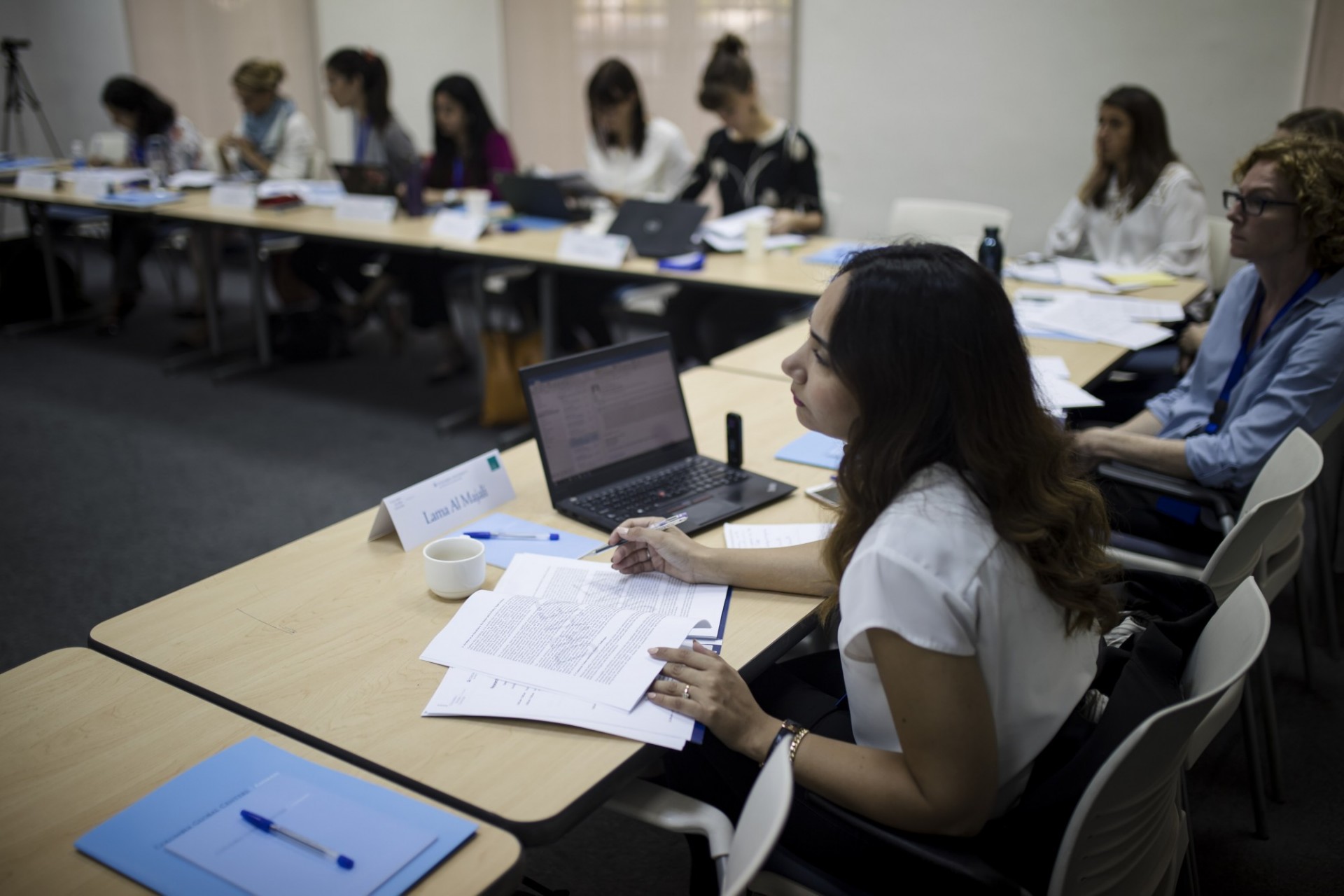 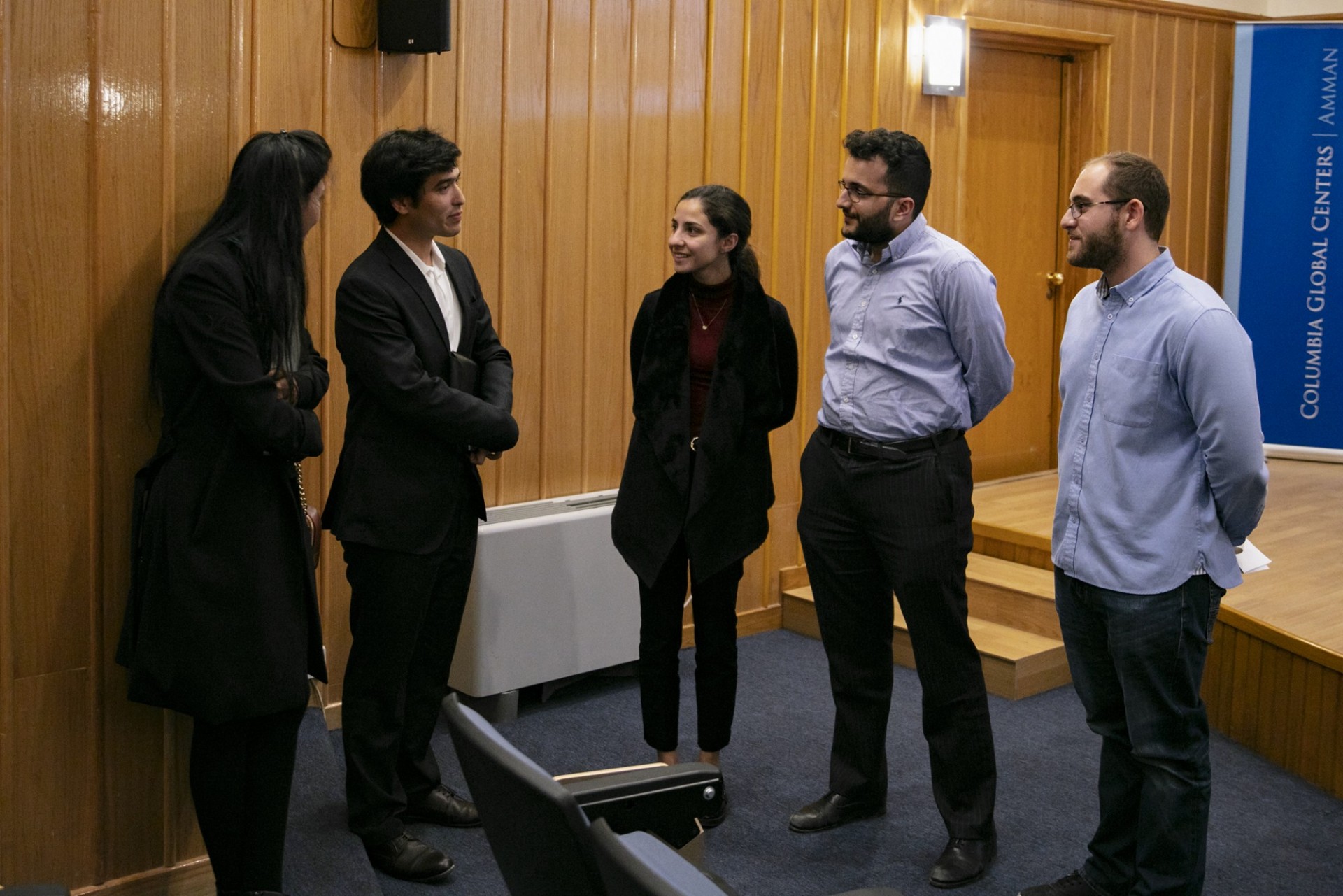 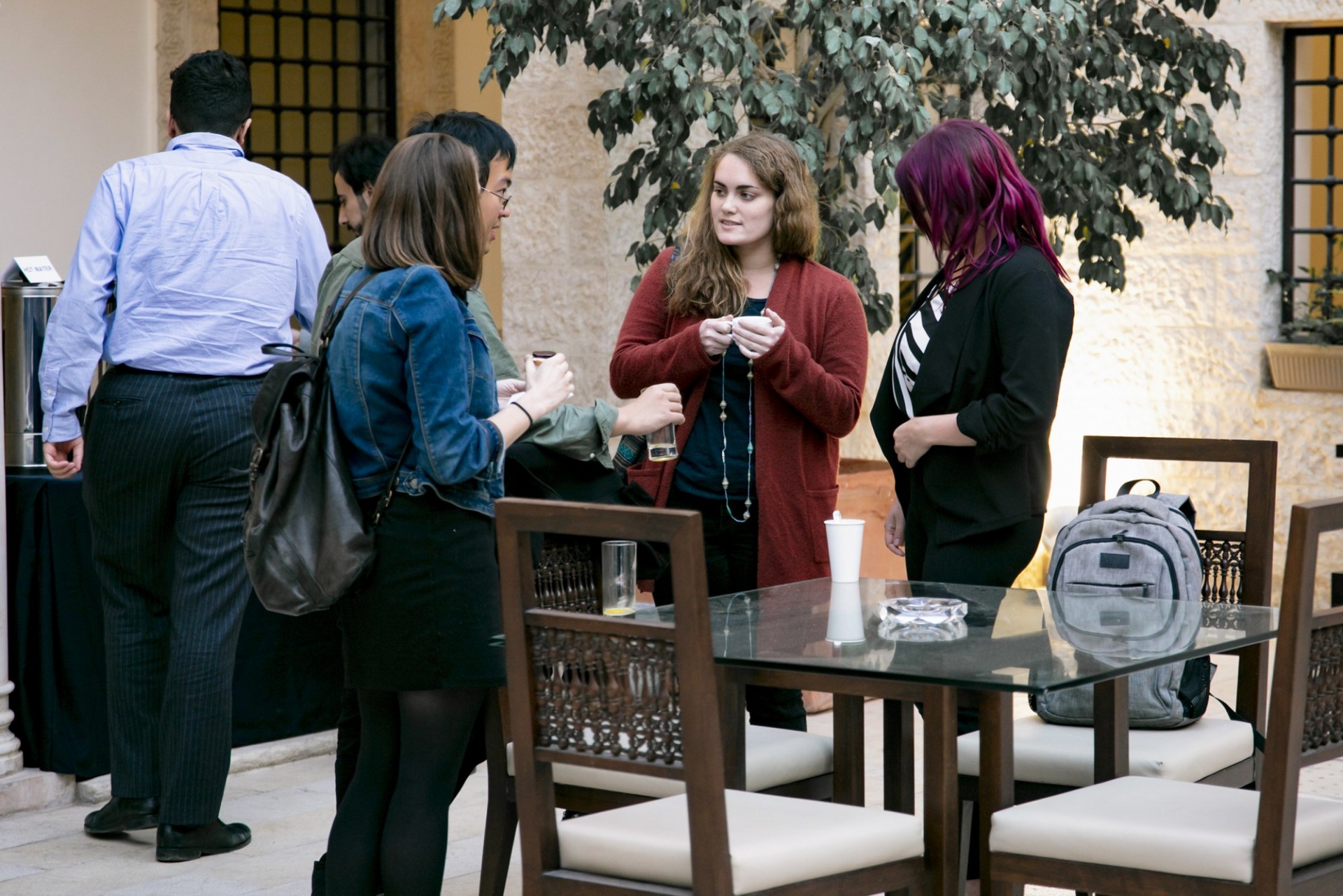 In collaboration with Columbia Global Centers | Amman, the Columbia University School of Nursing and the University of Jordan School of Nursing worked on an initiative, Health Status and Reproductive Health among Postpartum Syrian Women Refugees in Jordan: A Needs Assessment. The project, led by Jennifer Dohrn, was dedicated to understand the health needs and reproductive health practices of postpartum Syrian refugees who live outside of refugee camps in host communities across Jordan, for the purpose of providing services responsive to Syrian women in the postpartum period. The assessment was conducted in four areas in Jordan with plans to interview approximately six hundred women, focusing on their general health status and reproductive health knowledge and practices, as well as their attitudes towards breastfeeding, family planning, emotional/mental well-being, and preventions of sexually transmitted infections.

After the collected data is analyzed, dissemination of the results with the Ministry of Health in Jordan can be used to explore a framework for a community-based participatory approach that includes the voices of refugee women in the development of programs to improve their reproductive health. This initiative was led by Jennifer Dohrn, Assistant Professor of Nursing at the Columbia University Medical Center and Director of the Office of Global Initiative and its WHO Collaborating Center for Advanced Practice Nursing.

The Durable Solutions Platform (DSP), the Program on Forced Migration and Health (PFMH) at Columbia University, and Columbia Global Centers | Amman held a research study entitled, A Medium-Term Approach towards Self-Reliance and Resilience of Syrian Refugees and Host Communities in Jordan. The research, led by Monette Zard, explores the lessons learned and ways forward for Syrian refugees’ protracted displacement in Jordan. As current refugee assistance programs are adapting to address medium- and longer-term needs, this report explores how Syrian refugees’ self-reliance can be fostered in a manner that promotes resilience and social cohesion with host communities. The report highlights some areas where strategic investments in policy and practice can be made to ensure that refugee access to education, livelihoods, and social assistance can be leveraged to elevate access and better lives for all.

Columbia University, in partnership with Columbia Global Centers | Amman, The University of Jordan, The Institute of Family Health (IFH), and the International Rescue Committee (IRC) took a multidisciplinary approach to respond to the Syrian refugee crisis by conducting a research study that aims to understand the gendered health and mental health concerns of Syrian refugee women living in non-camp urban settings throughout Jordan. The study was spearheaded by Nabila El-Bassel and Neeraj Kaushal, and it involved a cross-sectional survey distributed to 507 Syrian refugee women over 6 months, in which the findings informed intervention and policies to develop comprehensive sexual and reproductive health services, and improve health outcomes for Syrian refugee women in Jordan.

The President’s Global Innovation Fund (PGIF) awards grants for faculty members to engage and leverage Columbia’s network of global centers. The program aims to enable the development of new projects and scholarly collaborations across global centers, in order to increase global opportunities for research, teaching, and service. Projects must engage at least one of Columbia’s global centers and may be sited in one of the eight cities in which a global center is based or in other locations in the regions served by a global center. The first round of PGIF grant request proposals was issued in May 2013. These projects play an essential role in realizing the potential of the Columbia Global Centers to create new opportunities for faculty and students, and defining what it means for Columbia to explore new channels of knowledge in the 21st century.

This proposal is the result of a PGIF planning grant, which provided funds to organize a symposium on “Challenges and Opportunities in Diagnosing, Monitoring, and Treating Peripheral Artery Disease (PAD) and Diabetic Foot Syndrome” at the Global Center in Amman, Jordan. A delegation of 4 professors from Columbia’s engineering and medical schools attended this meeting and visited the Jordan University of Technology and Science (JUST) and its affiliated King Abdullah University Hospital (KAUH). The symposium offered the opportunity to interact with leading scholars from the Mideast, while the visit to JUST/KAUH allowed for discussions with university leaders and local research groups.

These activities proved to be highly informative and directly lead to the two main aspects of this proposal. First, to build on overwhelming interest encountered at the symposium, it was decided to form a Mideast Limb Salvage Consortium that brings together engineers and medical experts in diabetes. The consortium will be a vehicle for the exchange of ideas, research collaborations, and joint fundraising efforts. Second,  we intend to focus on a particular research project that could generate data for follow up funding. To this end we propose to extend a current clinical study performed at CUIMC, which explores a novel optical technology for assessing the vasculature in PAD patients, to include 2 hospitals in Jordan. The Columbia team will build two imaging systems that will be transferred to JUST, where an engineering team will collaborate with physicians at KAUH and the Jordon University Hospital to perform a study involving at least 50 patients. The additional patient data will strengthen new NIH proposals to be jointly submitted. Furthermore, by having data from a Mideast population, follow up funding could be pursued from the Ministries of  Health in Jordan and other Mideastern funding agencies in Qatar, the UAE, and Egypt.

Water availability during extreme arid events in the Middle East in the past, present and future: connecting between science, policy, and urban design

The Middle East is a politically unstable region with a large population and limited freshwater resources. Unfortunately, climate models predict the region will only become drier in the future, with more frequent droughts and a 20 percent decrease in freshwater availability by 2100. A core recently drilled from the bottom of the Dead Sea shows that, during the planet’s two previous warm periods, the Middle East experienced thousands of years of severe aridity, with water levels dropping to half of what’s available today. These past, present and future trends have important implications for water resource management in a warmer, drier future Middle East, and can help with planning and adaptation. With support from the President’s Global Innovation Fund, this team organized a workshop at Columbia’s Amman Global Center in Jordan, spearheaded by Yael Feldman, Steven L. Goldstein, and Yochanan Kushnir, that brings together natural scientists, social scientists, urban planners and designers, stakeholders and policy makers. The aim of the workshop was to establish networks and promote cooperation between these groups who rarely interact, in order to seek solutions to this critical issue.

This three-day program offers an opportunity to share and receive critical feedback on research manuscripts and network with colleagues.

Monette Zard directs the Forced Migration and Health Program and is associate professor of Population and Family Health.

The War in Yemen: Consequences of the Crisis and Prospects for Peace

Shaping the Future of Construction: A discussion with Ibrahim Odeh and Roger Bayliss

Illness and Urban Displacement: Addressing the Needs of Refugees with Noncommunicable Diseases

Amman: An Engine of Economic Growth

The Holocaust and the Nakba: A New Grammar of Trauma and History

Is Democracy Secular? A talk by Andrea Cassatella